Trailers and Tractors – Stories of Migration from Afghanistan to beyond.

Caroline Brothers has an article in the Guardian on Afghan boys who ended up in Paris after an Odysee over land. It’s not a story that is limited to Afghanistan, stranded in my hometown they hail just as likely from Pakistan, and of course African countries. And those stories are old – it is just that they have been ignored largely and are continued to be treated with far to little sincerity by European governments. Let me recount such a story, that takes Brothers’ line further – where such an Odysee can end, and after Paris and Calais London is often not where it ends up.

When I worked for an international humanitarian organisation in Pakistan, I was issued the responsibility of a young Afghan man (I’ll call him Farhad) who had suddenly emerged in Peshawar. He had been deported from Germany many days earlier, where he had earned his education at the same organisation where I was employed now. A decade earlier, in the early 90s, his uncle advised him to take the 5000$ trip in a truck’s container to Europe, where he ended up having scarse contact to other family members who were already in Germany, but largely made his own way. He was repeatedly granted the right to stay but never with a full permit. When the German province he lived in passed a stricter law on asylum seekers, prompting all above 18 who had no close family members in the country to be deported at earliest – his parents had been killed in conflict back home – he was put on a plane to Kabul with two police accompanying him – the salary for these he had to come up for himself at a later stage. In Kabul he was released on the tarmac with a fat ‘Deported’ stamped into his Afghan passport. Ground staff in Kabul devalidated his passport and he was a persona non grata – no family and being a returnee from Europe made him suspicious and an easy target to be exploited. Together with a boy with a similar fate he met in Kabul – he had just been deported from England where his family did live, on charges of marihuana posession – they made their way to Peshawar. Here the guy from England assured, the chances to find someone to get them immediately back to Europe would be bigger. 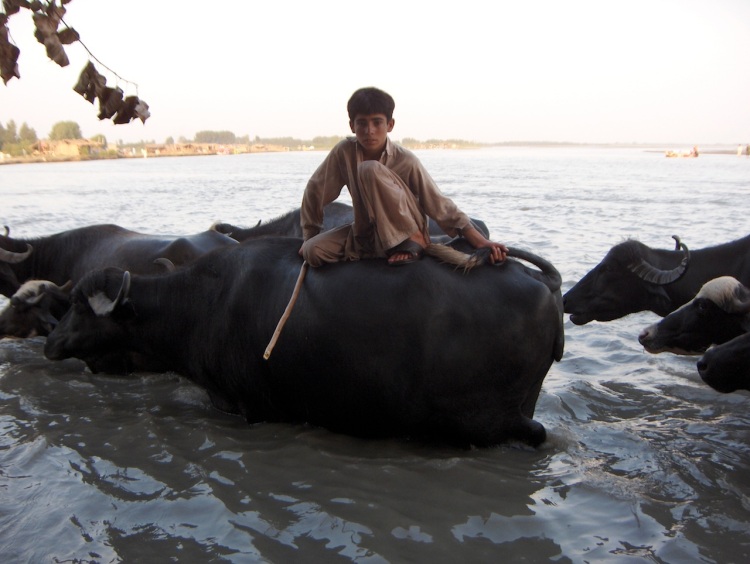 At this point, the organisation in Germany, who was in constant contact with Farhad, contacted their branch in Pakistan to take care of him. They refused. They had a point, where would they get to if they had to take care of all Afghan men coming illegaly to Pakistan, wishing to go to Europe. The international head office warned us to take the matter up as well, an issue too politically sensitive with little chance to cut a tear wrenching story out of it. He was to be forgotten, were it not for his care takers in Germany who felt it their responsibility to get him back to Germany. I ended up shuttling between Peshawar, Islamabad and Lahore trying to get to a solution, at constant threat of being seized with an illegal Afghan. His care takers were portraying Pakistan as a dangerous place in hell back home from which Farhad needed to be saved, while he was living in a mosque in Peshawar begging in the street to be granted a place to sleep, being constantly harrased by Pakistanis for being an unwelcome foreigner. The antipathy was large from Pashtuns like him in Peshawar to Punjabi clerks in Islamabad to International Staff at the Embassy and the UNHCR. But the naivity concerning the situation in Afghanistan or Pakistan itself of the international donors who only want the best (which is what?) back home in Germany (is it his home?) was the most troubling aspect for me. In their eyes, Afghanistan and Pakistan are exciting, oriental, dangerous, dirty and unwelcoming places from where you can only flee or go to if you want to help people or dip you finger into a spice bowl in a bazaar.

Not enough such stories as by Brothers’ are written to bring this topic, which has been growing bigger and bigger in recent years, to the attention of the public. But these are not incredible stories one should be marveling with sorrow about, only to rush to the next book shop and buy Khaled Hosseini. Our responsibility is to make sure that our governments deal with the issue sensibly.

I figured it was not for me to judge whether he should be helped to get back to Germany, or try to figure out a future in Afghanistan. That was for him to do, I would help him to get to where he thought going fit his realistic dreams.

Conrad Schetter from the German Crossroads Asia Project, has an excellent short write up (PDF) on patterns of migration in Afghanistan out.

Waves of refugees and labour migrants determine the social reality of life in Afghanistan ‐ perhaps more so than anywhere else. The intervention which has been on‐going since 2001 has barely considered this high spatial mobility in its conceptual planning. Where it has been noted, it tends to be perceived as disruptive. This article intends to demonstrate the extent to which forms of migration affect the lives of Afghans and should be taken account of in plans for the future of the country that go beyond the dominant state‐building model.

He shows how spatial mobility between Pakistan and Afghanistan is a common nearly unrestricted fact and a central tenet of many families. His story of a family from Lower Dir is especially interesting, as it could have been told by Babur (Zahir ud din Muhammad, 1483 – 1530), who like his forefathers and other realtives, when danger loomed, always shifted the women from his family to the safe havens of Badakhshan.

Another example, that of a family from Lower Dir in north Pakistan, shows the migration strategy of a family that can be reckoned to the educated middle classes. Part of the family moved from Lower Dir to the neighbouring district of Bajaur at the beginning of the 20th century. Several members of the family subsequently moved from there to Kunar in east Afghanistan. In the late 1940s, part of the family moved to Archi, on the Afghan‐Tajik border, when they were offered land there. […] All the women in this extended family live in Lower Dir. When violence escalated in the Swat valley in the spring 2009, the female members of the family were all brought to Kunduz, but they are now already back in Lower Dir; this shows, yet again, that the border between Afghanistan and Pakistan is not seen as a barrier to spatial mobility. This case, moreover, illustrates nicely the concept of the competence network Crossroads Asia.

I have pointed at one phenomenon of the porous Durand Line earlier, stemming from my experience with patients from our hospital close to the refugee camp Shamshatoo. Here I want to briefly look at another aspect of migration of Afghans into Pakistan and beyond.

While it is popular to write of the alleged presence of the Chinese in Pakistani administered Kashmir, it is Afghans who really have a say in business there. After the earthquake in 2005, the complete tractor business (that is transport of building material) was in the hands of Afghans who had lived here since long ago – one can imagine why they originally came. Organised according to the places they hail from in Afghanistan, they today control many garments, carpets and utilities shops, linked up to warehouses all over the country in the hands of other family members (just as Schetter portrays). When the construction after the earthquake quickly subsided, they were a lot more flexible than local Kashmiris to adapt to new jobs. When demand decreased significantly in their field, they would move back to Afghanistan for a few weeks or months and drive tractors there or follow up on another job. In the Afghan’s carpet shops letters and photos of female Swedish NGO workers are passed around while a family member just returned from Waziristan talks about his experiences with a Mehsud lashkar which he left to take some days off in cooler Kashmir.

Just as Bernd Glatzer explains in his War and Boundaries in Afghanistan: Significance and Relativity of Local and Social Boundaries (which one should read in combination with Schetter’s article), the Afghans here ‘consider Pashtuns from beyond the Durand Line as first and foremost Pakistanis.’ Even though their counterparts in construction would often be Pashtuns from Khyber Pakhtunkhwa (the daily wages construction business is in the hands of Pakistani Pashtuns who lived in tents for the weeks they would work, only to move on or return home when they had earned enough), they had little to do with them. The place in Afghanistan (sometimes down to the village) would matter most, after that Afghanistan. After that Pashtun identity, much later somewhere the fact that they are Muslims just like the Kashmiris.

While the debates on drones and talks to Taliban in Qatar may be important to lead and are essential to the area’s future, the fact that they are detached from the place (one up in thin air, the other on the other side of the street of Hormuz) they are symptomatic for what goes so wrong here. To be so far away from the Know and the stories that are happening just outside our doors as Brothers shows, and so in love with the grandiose speculative theories.

I am looking forward to this book.