This section includes an Introduction into the Series and Annual Data for all Provinces. For Data specifically on Balochistan, KP and FATA (for which we also did a monthly analysis) and Punjab and Sindh please consult the respective posts.

Analysis of conflict data for the case of Pakistan is growing in recent years, especially with the drone war and recently sectarian violence getting wider attention. There are three major issues that these analysis face.

Conflict is often simply discussed in numbers – how that makes little sense, we have criticized earlier here. We have kept it simple and are not doing any detailed statistical analysis, since this series of posts is primarily on getting the data together and looking at it roughly (that is an analysis of the data available, not of the war by using data!). It is in any case important to keep in mind that such a view does never tell the whole story.

Certain parts of the war in Pakistan are looked at completely independent of each other, or only selected conflict events are compared. One can argue that there are currently many sorts of conflicts going on in Pakistan (violence in Karachi, insurgency in Balochistan, Sectarian Violence all over the country, the drone war, Army operations in KP and FATA, infrequent border skirmishes with India). Most of them have an interrelation on a number of levels though (operational, political, in their media portrayal), which we do not heed at the moment. Especially if viewed from abroad, researchers like to differentiate between ‘our’ war with ‘them’ and just ‘their’ wars for which we have no responsibilty. Derek Gregory criticizes this distinction and we believe that one can not look at one while disregarding the other – running a ‘succesful’ drone war against the heads of al-Qaeda factions, while the country is plunging into a violent abyss seems tragically odd. Here we are looking at available data from a number of violent conflicts in Pakistan. Since the link between the violence in Karachi and the rest of the country is especially difficult to understand and data is not yet available in an apt format, this part is disregarded. Also targetted killings are not looked at in this analysis and the Kashmir conflict has not been included. The quality of data regarding Sectarian Violence is yet poor, however we try to include what is there.

Finally, while looking at numbers, Pakistan is often looked at as one data column, often also with higher resolution province wise. We have collected data by district, and are hence able to look at the regions in better detail. Just looking at FATA without KP is taking attacks in Miran Shah and Domodolla in FATA together, while the earlier may be much more comparable to Hangu and the later to Dir in KP respectively. The same can be said between terrorist links from KP to Punjab. Actions in Swat had effects on Northern Punjab, the Souther Punjab is closely linked to what is going on in DI Khan. And then terrorist networks in Pakistan do operate at much wider scales, to Lahore and Karachi. It is difficult to determine how to compare conflict data in the area in a most reasonable way to for example deduct effectiveness of drone strikes or army operations against terrorist networks. We realize that one has to be cautious to conclude. However, looking at data at better detail than just the provincial level is in our view important. For the FATA and the neighbouring districts in KP we have also looked at monthly data.

There are a number of data sets on conflict in Pakistan available. The best seems to be at PIPS, however it is not free of cost. Others, especially from the US or UK, have a strong drone focus and are, based on the arguments of their respective think tanks heavily biased in one way or another (you can find an overview in our Library). I have found the SATP database from Dehli the most extensive and detailed, without bias in one way or the other. It lacks yet a good collection on sectarian violence, though this seems to be improving since a while. Also there were some mistakes in locations (all data are extracted from news reports), but they were at a scale that is insignificant to an analysis with district wise resolution.

Since all data is obtained from media reports, one has to ask how reliable or biased this source is. The war in Balochistan is heavily underreported and data regarding events there is definitely less valid than for other regions. Equally, media reports often draw their numbers from the Army, which may well tinker with data in their favor. In this analysis, we are not making a distinction between terrorists, insurgents, Army and Security Personell or civilians. We attempt to give an idea of the impact generally and not on ‘who is winning’ and we do not value one’s life more or less than someone else’s. One should keep in mind however, that numbers in Balochistan and FATA may be very well less accurate than for example in Punjab and Sindh.

We welcome suggestions on data sets in this regard.

We have collected all raw data, punched it into spreadsheets and make them accesible. You can contact as for further processed data. We understand that working with Spreadsheets is about as bad as it gets when trying to work something from data sets – however, since we are currently only in the phase of grouping the data in a relevant way we find it to be to be the most convenient. As this work grows and as time permits, we may work with more professional software, which we do use in other work.

Other analysis in this direction

A very recent, yet unpublished paper looks at spatial mapping of the drone war in FATA and tries to deduct effectiveness (P.B. Johnston, 2013). There are a number of reports who look at conflict data on the provincial level (which we collect in our Library as we come by them), but few of them with a satisfying look at further detail.

We have collected data on people killed and injured as well as the number of events from 2009 to 2012. The data is available at a daily resolution. For the moment we only lookes at annual data, and at monthly scales in FATA and neighbouring districts in KP. Data is available on and grouped as blasts (suicide attacks, bomb blasts, major IED blasts), drone strikes, encounters (between army and insurgents or insurgents and civilians or between different insurgent groups – it is planned to look at these separatley at a later stage) and sectarian attacks. Only the first three are mutually exclusive, a sectarian attack may either be a blast or an armed attack. Data is available for all provinces, however little regard is given to AJK and Gilgit Baltistan since the numbers in these provinces are relatively minor, or in the latter are mainly sectarian and targetted killings, for which the SATP database is not very suitable.

Figure 1 shows the number of bomb and suicide attacks, with Figure 2 giving trends, comparing 2012 to the mean of the earlier three years. Gilgit Baltistan only had one blast in 2011 in the dataset. While Punjab has become comparably calmer after major attacks especially in Lahore in recent years, in all other provinces the number of attacks are on the rise. And while FATA is often in the news just for drones and Balochistan for insurgents, while major blasts are often reported only from KP and Punjab, these two provinces are heavily affected. Even if many of these were without a loss of life, we argue that also minor attacks are a significant cause of fear and impede daily life heavily. They should therefore be equally regarded.

Figure 1: Number of major attacks/blasts in all provinces [Data]

Figure 5 and Figure 7 show the number of deaths in all blasts. While they have gone down in the most populous provinces, they have risen heavily in 2012 in FATA and Balochistan compared to ealier years. Figure 7 shows how the total number of affected per blast (killed and injured) has gone down in most cases. This is mostly due to a rise in minor bomb attacks without a loss of life in KP and Sindh, and only in Punjab has the lethality of the lethal ones decreased.

Figure 8 and 9 give figures of people injured in blasts. This shows how overall such attacks have affected the Western provinces to a considerable larger degree than Punjab and SIndh.

Figure 8: Total Injured/Maimed due to Blasts, Armed Encounters and Drone Strikes in 2012. [Data]

Figure 9: Change in Total Injured/Maimed due to Blasts, Armed Encounters and Drone Strikes in 2012 compared to 2011. [Data]

We have also looked at numbers from armed encounters. These are relatively negligible for other provinces, and we here only look at KP, FATA and Balochistan (see Figure 10). While the major operations by the Army in Swat, Dir and South Waziristan have ended and in FATA have now heavily resumed further north, it is noteable that the number of deaths have consistently risen in Balochistan. Considering that probably many encounters are not even reported, this development is, especially in regard of it being so little regarded in the media, especially worrying. Deaths in Encounters have risen by 169% in Balochistan and 22% in the FATA in 2012 compared to the 2009-2011 mean and have decreased in KP. In Sindh they have increased by 224% but stand at only 27 in total in 2012 (excluding the Karachi urban war!).

Figure 11 shows the number of sectarian attacks. However, as noted earlier, the SATP dataset doesn’t seem to include all such events especially in earlier years and whether attacks are sectarian or not is often not clear. We do not go into further detail into this issue at this point, and may do so later once datasets and reporting (!) have improved on it. The trend however, from what is there, is obvious. 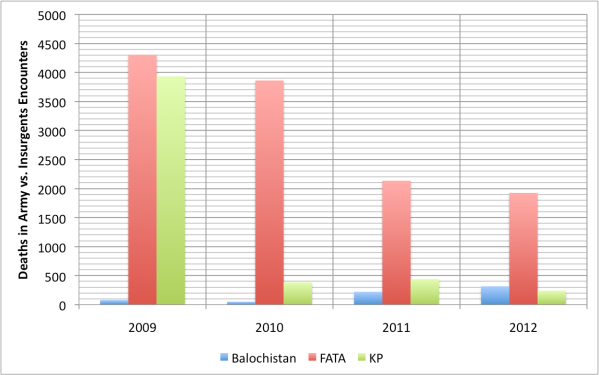 Finally we can look at the total numbers of people killed during different kinds of violence (Figure 13 and Figure 15). A rather shaky comparison is given in Figure 14, to illustrate how heavily affected FATA and Balochistan are actually affected. This is solely to bring total detahs in comparison with the actual number of people living in the area. This is not to suggest, that this percentage of the actual population has died, since especially in FATA, many of the insurgents and Army Personell killed are originally not from the FATA and sometimes not even from Pakistan.

Figure 12: Total Number of Deaths due to Conflict in Pakistan [Data]

While this was not the case in the years before (see Figure 5), in 2012 the FATA has become the region in Pakistan where the death toll was the highest (Figure 13 and 14). 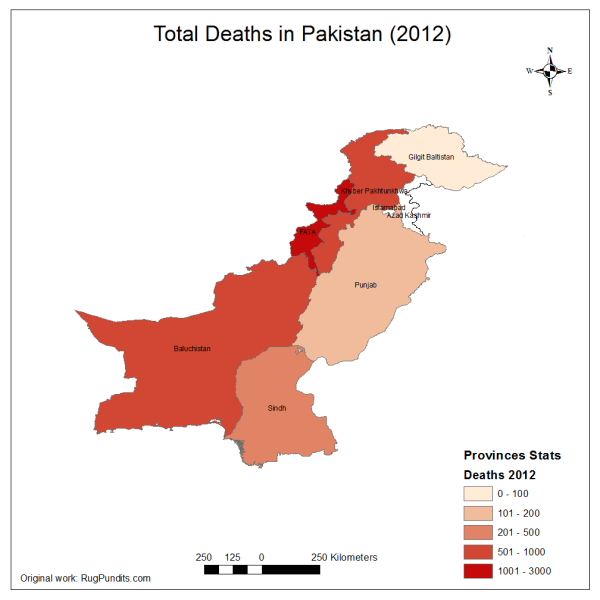 Figure 14: Total Fatalities due to Blasts, Armed Encounters and Drone Strikes in 2012. [Data]

Figure 15: Change in Total Fatalities due to Blasts, Armed Encounters and Drone Strikes in 2012 compared to 2011. [Data]

Since this is a rather static analysis of data, not looking at direct relations between areas on the operational level, it is not surprising that the Provinces of Balochistan, FATA and KP figure most prominently. The complicity of the main provinces, Sindh and Punjab, in much of the violence should however not be disregarded. While these areas may be less violent in terms of deaths, there are negative trends in Sindh especially as well (numbers of blasts, sectarian violence) and especially sectarian violence seems to be closely linked to hubs in Southern Punjab. Looking at available data, we will however largely focus on the earlier three provinces for the moment in the sections on the respective provinces.